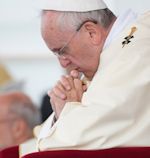 In his second anniversary of Pontificate, during the homily of March 13rd in the Vatican Basilica, Pope Francesco has announced a Extraordinary Jubilee focused on the mercy of God, which will open on December 8th, 2015 at a distance of 50 years from the end of the Second Vatican Council , and will end on November 20th, 2016 in the day of Solemnity of Christ the King.

Pope Bergoglio defines this jubilee as "Holy Year of Mercy", explaining that no one is excluded from the mercy of God, because there is no sin that God can not forgive: a clear message for the synod fathers who will take part in the Synod of Bishops on the family to be held in Rome from 4th to 25th October, 2015, in which bishops will discuss the difficult topic about the reception in the Church of gays and divorced and remarried people.

The organization of the Extraordinary Jubilee has been entrusted to the Pontifical Council for Promoting the New Evangelization, and on next April 12nd, 2015, the Feast of Divine Mercy, the papal bull of convocation of the Holy Year will be published.

It will be an extraordinary year and eventful, and in Rome it is expected a large influx of pilgrims from around the world to take part in religious rituals, in order to receive a plenary indulgence and to through the Holy Door located in four basilicas of Rome: St. Peter's , St. Paul Outside the Walls, St. John Lateran, and Santa Maria Maggiore. 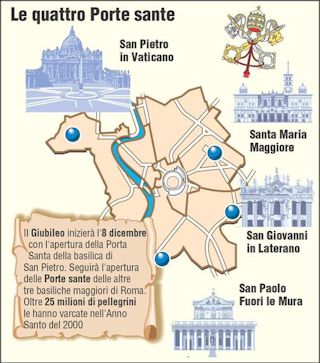 This will also be a great opportunity to visit the Vatican and Rome, a city rich in art and history with its unique beauties of the world, therefore the capital city will be ready and it began his preparation for the event since now, making Via dei Fori Imperiali entirely pedestrian and creating paths for walking to the Vatican.

To better explore the whole city, for arrivals and departures from Fiumicino and Ciampino airports, Noleggio Bus Roma Srl has opened reservations for this extraordinary occasion, it will have several coaches and minibuses of different sizes, so that the groups of faithful and tourists can book right now the bus necessary to their movements, as well as for excursions and visits in the Italian cities of major interest.

For information, please send an e-mail to info@noleggiobusroma.eu.

Some suggested itineraries can be found in the section dedicated to the tour of basilicas.