Rome is one of the oldest cities in the world with many stories, myths and legends that not everyone knows, so we have prepared a special and personalized tour to discover the hidden beauties of the capital.

If you are a group of tourists or friends or a tour operator who wants to propose a particular itinerary, we will introduce you to a mysterious Rome with churches, museums and palaces that hide ossuaries, crypts, incredible and suggestive stories of the eternal city.

The coach tour for your group will start in your hotel and you will be accompanied by a tourist guide in your language for half day service of about 5 hours, in the morning or afternoon.

Itinerary of the coach tour

The itinerary includes the visit of 5 representative places of mysteries of Rome and they are all located in the heart of the city, so much of the route will be done on foot, while only the longest transfers will be performed by coach.

Departing by bus from your hotel, you will arrive in Via Veneto to visit the darkest and gloomy place of the Mysterious Rome tour, the Capuchin Crypt located under the church of St. Maria della Concezione, in the past annexed to a Capuchin friar monastery demolished in 1800 to allow the construction of Via Veneto.

This place really leaves its visitors impressed by its horrid scenery, everywhere you can see the decorations made up of the bones of over 4,000 friars who lived in the convent and died between 1500 and 1800.

Going down into the crypt you will cross a long corridor where you will reach five small chapels, each of which has been decorated with a bone in particular that gives it its name, so we will find the chapel of the tibias, basins, skulls, resurrection and of three skeletons.

The bones compositions represent death-related symbols such as hourglasses, clocks, butterflies, there is also the skeleton of a child holding a scales and the reaper's scythe.

On the walls there are thousands of bones like tibias and femurs, as well as numerous skulls, all used to create niches that welcome skeletons dressed with the habit of the ancient friars.

The purpose of the friars in setting up this crypt is to provide a point of reflection for its visitors who are obliged to look death in the face, where human remains have only a decorative purpose demonstrating that earthly life does not matter without hope of the eternal life. 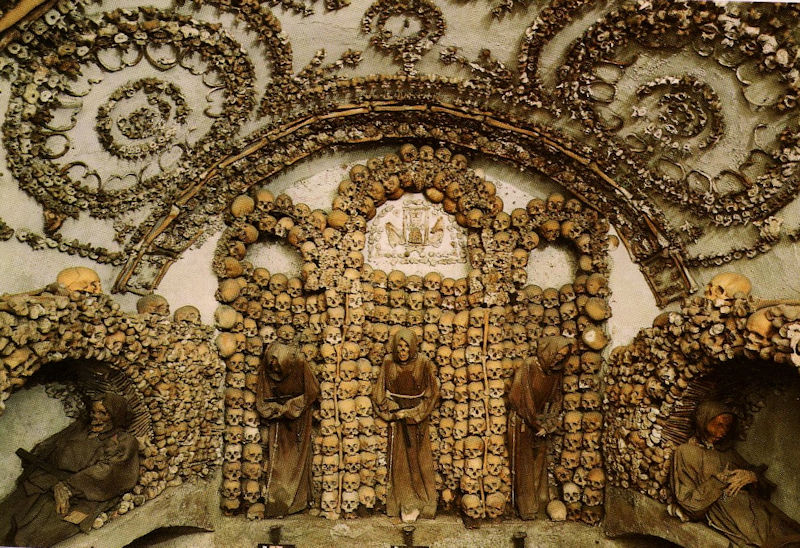 With few minutes walking of about 500 meters, you will reach Via Gregoriana to admire the outer wall of the Palazzetto Zuccari, a 16th-century palace known as the house of monsters because its entrance has the face of a monster in stone, where the access door is housed in a giant and monstrous open mouth, the nose is the key of the vaulted portal, the cheeks are the frame and the eyes with the eyebrows act as a tympanum.

Next to the entrance door there are two large windows created inside monstrous stone faces, but smaller in size than the door.

On foot you will continue towards Trevi fountain, just 650 meters away, and after a short stop to admire this famous monuments with ritual photos, you will enter to the church of Saints Vincent and Anastasius, located in front of the fountain.

In the apse there are some niches which preserve the precordi, the internal organs close to the heart enclosed in the thoracic cavity that were removed from the deceased popes before their embalming.

A unique feature that you will not find in any other church in Rome is the presence of two statues of woman with bare breasts and a female bust above the portal.

It is said that the bust represents a nephew of the cardinal, lover of Luigi XIV and wife of Prince Lorenzo Onofrio Colonna, for others it could represent Ortensia, a charming woman who, rejected by her uncle and two rich suitors, first married a French marquis and then he parted ways to join with an English knight; in both cases the bust represents a woman who was not exactly a saint.

With a last walk of 300 meters you will reach via Milano, near via del Traforo, to meet the bus and continue the tour to Piazza dei Tribunali.

The fourth stop of the tour is the Sacred Heart Church of the Intercession located next to the Court Palace, which houses the museum of Souls in Purgatory, unique in the world of its kind.

Among the various testimonies you will find the photo of a man's head that was engraved on a pillar of the altar of the chapel dedicated to the Virgin of the Rosary which was burnt at the end of the nineteenth century; it is said that this head was the image of a soul in Purgatory.

The many burning footprints of hands and fingers left by historical figures after their death are other mysterious testimonies, imprints still visible on old wooden boards, clothes, books and objects, each with its own history.

You will continue by bus along Lungotevere street up to the Ponte Sisto or nearby, from where you will continue on foot to Via Giulia to visit the Church of St. Mary of the Oration and Death, seat of the homonymous confraternity, the last macabre place of our tour which presents symbols of death.

From the first glance at the facade of the church, you can see the plaque representing a skeleton with the Latin inscription Hodie mihi, cras tibi, which means Today to me, tomorrow to you.

The visit continues inside, in the crypt below the church that looks like an ossuary with artistic decorations, crosses, sculptures and chandeliers all made by bones and skeletons of more than 8 thousand bodies buried there by the brotherhood from 1552 to 1896.

Some skulls are well preserved and on the frontal area they have incisions such as the name of the deceased, the date of dead and, in some, also the reason for death and the place of the find.


After the visit, you will return by our coach to the hotel or other place agreed with our booking office.

Sure that this coach tour will be appreciated by many people, we are waiting for you in Rome to discover its hidden beauties.