Rent a bus to attend the beatification in Rome October 19th, 2014 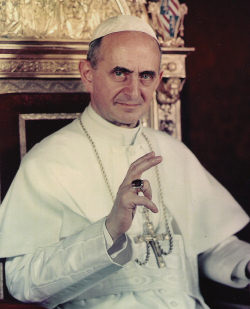 October 19th, 2014, this is the date chosen by the Pope Francis for the beatification in the Vatican of Pope Paul VI, an important day for the millions of faithful who await this event for a long time.

On this day it's so important for Catholics around the world, society Noleggio Bus Roma Srl, on the occasion of the beatification of Pope Paul VI, will have availability of the entire fleet of buses and minibuses so that their customers can go around the city, to get to hotels, railway stations and airports for transfers to the Vatican, for other excursions in the surrounding area or in more distant cities, and in any case for any needs necessary to its customers

From every part of the world many people will come to Rome to attend and participate in the event which will be held in St. Peter's Square at the Vatican, and the City of Rome will ensure that the capital can accommodate the large flow of tourists with special provisions regarding the viability and access to the Vatican.

For its customers, Noleggio Bus Roma Srl also offers the possibility to reserve, at great value rates dedicated only to groups, the reservations of hotels and restaurants for the period of the beatification of Pope Paul VI, suggesting the best solution thanks to the presence on place and deep knowledge of the territory.

We await your requests both for reservation of the most appropriate means to your transfers, both to book your accommodation, and having already received numerous confirmations so far, you should contact us as soon as possible through the appropriate bus rental request, or by sending an email to info@noleggiobusroma.eu or info@noleggiobusroma.eu, the dedicated staff will be happy to respond to all requests in the shortest possible time.


Some memories of the Pope

Pope Paul VI was one of the most beloved Italian popes and not only that, here is our short "portrait" of his life that has allowed his beatification.

Giovanni Battista Montini was his name , he was born in Concesio, in the province of Brescia, from Giorgio Montini and Judith Alghisi, he had two brothers, one of which lawyer and the other a doctor, he studied at the Jesuit fathers in Brescia, inferior schools and grammar school, then he entered the seminary in 1916.

Ordained a priest in 1920, he celebrated his first Mass in Brescia, in the Sanctuary of Santa Maria delle Grazie, and the same year he moved to Rome, where he devoted himself to the study of civil and canon law, philosophy and letters.

He collaborated with the Vatican Secretariat of State, was apostolic nuncio in Warsaw and pro-Secretary of State for Affairs overtime, he was Archbishop of Milan and after Cardinal, and finally on June 21, 1963 Montini was elected Pope, beginning with the name of Pope Paul VI.

Paul VI was the first pope to travel by plane to the Holy Land in 1964, followed by numerous trips around the world, and was the first to celebrate the World Day for Peace in 1968.

On the eve of Christmas, on December 24, 1974, Pope Paul VI opened the Holy Door ushering in the Holy Year of 1975; on April 16, 1978 wrote a letter to the Red Brigades for the release of Aldo Moro, though unfortunately was not successful, and on 6 August of the same year, because of his poor health, he died in the summer papal residence in Castel Gandolfo (Rome).


The miracle of the Pope

The miracle of Pope Paul VI has been in 2001 in the United States, on an unborn child: the fetus was on the 5th month, the mother's pregnancy was complicated, the doctors said that the baby would die shortly after birth or at least he would live with severe malformations.

The woman refused the suggestion to have an abortion and devoted himself to prayer, thanks to a nun, who gave her an icon of Pope Paul VI and a fragment of his dress.

The woman asked for the intercession of Pope Montini and the situation improved rapidly, so that the child was born by caesarean section in good condition.

Now the child is 13 years old, he is constantly monitored to ensure its normal growth. This news reached Rome, ten years ago the diocesan investigation was opened, and last December the medical consultation of the Congregation certified the inexplicable healing of the fetus.