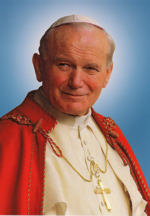 Everyone remembers the most beloved Pope in history, born in Wadowice (Poland) with the name of Karol Józef Wojtyla; he was a professor of philosophy, Archbishop of Krakow, Cardinal since 1968, and on October 19th 1978 he was elected pope and took the name Giovanni Paolo II.

He took part in the Second Vatican Council as a young bishop, he wrote numerous encyclicals including the most famous "Redemptor hominis" in 1979, "Laborem exercens" in 1981, "Centesimus Annus" in 1991, and he traveled all over the world.

The whole Catholic community and believers around the world mourned his death on April 2nd 2005, immediately asking his beatification which took place on May 1st 2011, proclaimed blessed by his successor Joseph Aloysius Ratzinger, emeritus Pope Benedetto XVI. 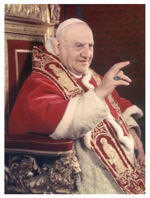 Pope John XXIII was beatified on September 3rd 2000 by Pope Giovanni Paolo II. Angelo Giuseppe Roncalli, this is his name, was born in Sotto il Monte (Bergamo) on November 25th 1881, he was the secretary of the bishop of Bergamo, a Diplomatic - Apostolic Nuncio, Cardinal since 1952 and Patriarch of Venice, elected Pope on October 28th 1958.

On January 25th 1959 he convened the Second Vatican Council (in which also took part the young Bishop Wojtyla) and he opened it in 1962, but he died after the first session, on June 3rd 1963.

His reign was short, it lasted almost 5 years old, but he was able to make himself known to the world for the wonderful person he was, so as to take the name of Good Pope.

These will be days of great joy for all the faithful of the world that will arrive to St. Peter's Square at the Vatican to attend the grand event.

For this occasion, the Prefecture of the Pontifical Household has announced that "the participation will be open to those who will find a place in St. Peter's Square, Pio XII Square and Via della Conciliazione, without the need of any ticket."

The second half of April 2014 will be a period when Rome will welcome millions of tourists and believers more than it usually accepts (for the date of April 27th 2014, it is estimated an influx of more than 5 million visitors), and for the occasion Noleggio bus Roma will provide numerous buses and minibuses for transport in the city, transfers to and from hotels, transfers to and from the airports of Rome, excursions and anything else necessary to their customers.

You should send your quote request as soon as possible, then to follow up a confirmation in timely, to ensuring the availability of buses for the period of visit in Rome.